How do you know summer has officially arrived? The possible indicators are endless: the long Memorial Day weekend, the first cookout of the year, the first Summer Friday day off, the first day of summer break, the first time you break out the swimsuit for the year, or perhaps the old school Summer Solstice [i.e. the official calendar date for the First Day of Summer]…it happens to be June 21 this year [at least summer has the decency to start on a Friday]. For me, summer hasn’t arrived until I’m sitting in the ballpark.

Growing up, my brother played travel baseball, so my summers were spent at the ballpark, slathering on sunscreen, burning the backs of my legs on metal bleachers, and eating more than my fill of hot dogs, cow tales and laffy taffy. I improved my math skills working in the shade of the concession stand, had the important task of operating the scoreboard, and even kept stats for the team [I bet you don’t know what DP 5-3-2 means]. And one fine summer day at the ballpark, I read, for the first time, what happened to Harry Potter during the Battle of Hogwarts. So, when summer rolls around, it isn’t really summer until I’ve spent some time in the ballpark.

You wouldn’t think it would be all that hard for me to get the summer started since the Nation’s Capitol has made enjoying America’s Pastime really easy. For starters, the ballpark is right downtown. You can hop on the Metro and be there in a matter of minutes. Metro not your thing? You can literally walk the 1.5 miles from Capitol Hill to the ballpark. Not to mention, it’s quite the social event. It’s not uncommon to go to a weeknight game and see folks just getting off work, still in their dress pants and dress shirt with their sleeves rolled up to their elbows [having likely lost the tie by now] co-mingling with the red, white and blue clad Nationals [AKA the Nats] fans in their “Curly W” paraphernalia. Since no one in DC is actually from DC, it’s also not uncommon to see just as many jerseys and hats supporting the opposing team as those supporting the Nats. And since you can score tickets for just $10 or $15, visiting the ballpark is not cost prohibitive.

Good news folks: Summer 2013 has finally arrived! Sunday afternoon [is there a better time for baseball?] I was in the the ballpark for a Washington Nationals vs. Minnesota Twins game with a group of friends. 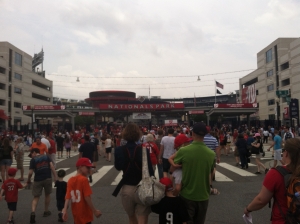 The day started out exceptionally cloudy, but the baseball gods really came through by the end of the game. 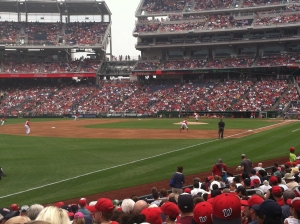 We had great seats down the third base line

It was a slow start, but when the Nationals started scoring our NATITUDE came out

The sun came out and so did the Nats bats

Here’s to hoping I get to celebrate summer with the Nationals a lot more in the next few months!